After the Election…What I think

The 2012 election is over. President Obama won re-election. Democrats kept a majority in the Senate and picked up some seats in the House. (In Colorado, Democrats now hold the governorship, the state Senate, and the state House!) Obama crushed the electoral map, even without Florida being final. And he took the popular vote. In fact, Democratic candidates have won the popular vote in 5 of the past 6 elections.

Now it’s time to get to work.

But, first, I can’t hold back sharing some of my opinions about the election, politics, the parties, and our government.

The direction of our society: To me, this election represents a clear signal of people’s desires for how they want to live and build a society.

The election involved taxes, debt, war, foreign policy, and other bureaucratic matters. But this election was really about emotions, community, and freedom.

Democrats, still imperfect, offer choice, support, community, and liberty—liberty in the form our country was founded on.

Obama’s campaign was impressive. He and his team got people to knock on doors, make phone calls, and focus on the right neighborhoods to get the votes they needed. Democrats are just doing these things much better than Republicans.

And, the Obama team sent a lot of emails. I’d be willing to bet I got close to 1,000 emails. All that Internet campaigning has been a trademark of Obama, but it really owes its roots to Howard Dean and his 2003 campaign.

Dean’s over-celebration may have ended his own presidential hopes, but he set the stage for a new strategy of campaigning using the Web. Obama’s team picked up the strategy, crafted it, and used it to support two winning campaigns. Every since FDR, that’s the best a presidential campaign can do.

By the way, Obama won Massachusetts.

Money in politics: This election season included a lot of money. According to the Sunlight Foundation, “No matter what part of it you look at, campaign spending for this election has been higher than ever before. It has been estimated that the first post-Citizens United election has brought more than $6 billion in spending.”

It’s not the amount of money that’s a problem. The problem is who is spending it and how it’s being spent.

The overshadowed story: Elizabeth Warren knocked off Scott Brown to pick up a Senate seat from Massachusetts. She is a true consumer and citizen supporter. Here are some of her comments that ring true to me. It represents the kind of honesty, humility, and realism I support.

There is nobody in this country who got rich on his own. Nobody. You built a factory out there – good for you! But I want to be clear. You moved your goods to market on the roads the rest of us paid for. You hired workers the rest of us paid to educate. You were safe in your factory because of police forces and fire forces that the rest of us paid for. You didn’t have to worry that marauding bands would come and seize everything at your factory, and hire someone to protect against this, because of the work the rest of us did. Now look, you built a factory and it turned into something terrific, or a great idea – God bless. Keep a big hunk of it. But part of the underlying social contract is you take a hunk of that and pay forward for the next kid who comes along.

The economy: By almost every measure, the economy is improving. Here are a couple examples:

The stock market is up. The Dow, Nasdaq, and S&P 500 have all had significant gains since Obama took office.
Here’s the Dow’s performance:

Unemployment is dropping: It’s been up and down, but it’s currently about the same as when Obama took office.

The elites: There are just as many rich Democrats as rich Republicans. People living in the wealthiest areas of the country voted for Obama.
Here are the 100 wealthiest counties in the US: 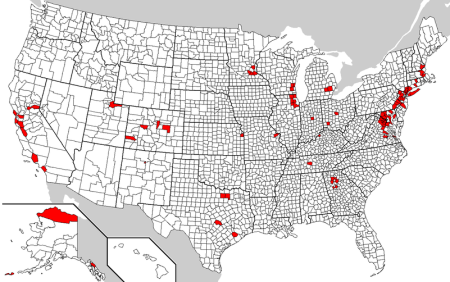 And here’s the Electoral map:

People living in the most affluent counties in the country, other than in Texas and a few in Virginia, voted for Obama.

Moving on: We get four more years of a President who believes in working together, not leaving any one behind, and moving every one forward. We also get at least two more years of a divided Congress. We all want action from our elected officials, but we, as a country, are not frustrated enough to make it happen. Apathy and disillusionment are still holding us back. The 2012 voter turnout isn’t final yet, but it’s not looking good, even worse than 2008.

Luckily we live in the country with the most changeable system of government in the world with the most opportunities for citizens to take the reins. We just need to step up and do it.

This entry was posted on Thursday, November 8th, 2012 at 6:55 AM and is filed under government, Politics. You can follow any responses to this entry through the RSS 2.0 feed. You can leave a response, or trackback from your own site.

This site uses Akismet to reduce spam. Learn how your comment data is processed.